Use LeadDyno’s Tracking Campaign feature to measure your PPC advertising investments alongside your other marketing efforts to see which ad groups and PPC mediums are bringing you the highest quantity AND quality of leads and conversions.

We recommend using a unique LeadDyno Tracking Campaign for each Ad Group you are running within Google Adwords. Place the campaign link as the Actual URL for each ad that you create within the Ad Group. 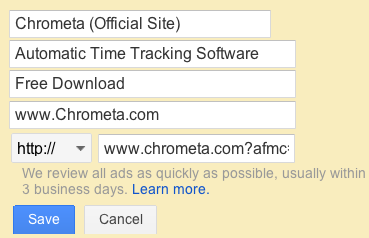 The bottom field contains a LeadDyno tracking link for this ad.

This will place your pay-per-click lead and conversion tracking alongside your other marketing channels, so that you can compare the various mediums and campaigns side by side.

Here’s an example of an Adwords campaign, compared with a banner ad campaign (Attorney At Work), and email campaign (TechnoLawyer), and a Google Adsense campaign (Excel Timesheet). Our Adwords campaign brought us only the third-highest amount of clicks – but it brought the most leads, and more conversions than the other three campaigns combined!

We recommend the same link placement when running an Adsense campaign (also called Google’s Content Network). Place a unique LeadDyno tracking link as the Actual URL for each ad within a distinct Ad Group.

Here’s an example of an Adsense / Content Network ad, with the LeadDyno tracking link located in the bottom field. 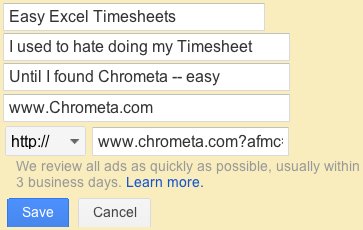 The bottom field contains a LeadDyno tracking link for this ad.

Why Split By Ad Group?

We recommend segmenting your LeadDyno campaigns by Ad Group because we believe this is the largest determining factor in the quality of the leads you are generating. Ads are meant to be split-tested in order to boost response rates, but ad groups indicate the motivation – and likelihood of buying – of your prospect.

So we recommend “controlling” at the Ad Group level, which is the most detailed level of lead and conversion information you need. These numbers will also roll up and show you how well Google Adwords and Adsense are working out for you in general.

Did this answer your question? Thanks for the feedback There was a problem submitting your feedback. Please try again later.